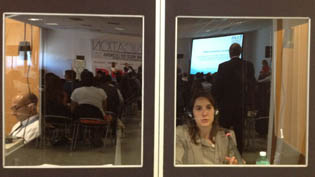 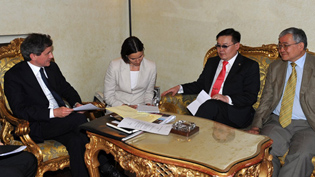 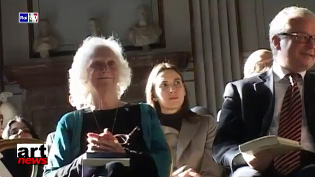 Whispering interpreting for Mrs. Nora Mayper who handed over some letters by Giuseppe Mazzini to Undersecretary Gianni Lettaas part of the celebrations for the 150th anniversary of Italian Unification (video by Rai Educational, March 2011). 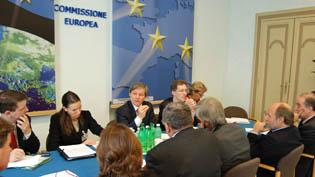 Interpreting is a translation service provided verbally by one or more interpreters in different ways, depending on the type of event for which translation is needed, the possible use of equipment such as booths and headphones, the number of people requiring translation and event schedule.

Simultaneous translation is provided while the speaker talks and requires the use of equipment such as booths for interpreters and headsets for listeners. It usually implies the presence of at least two interpreters per booth per language, in order to allow for appropriate turnover.

In consecutive interpreting the speaker enunciates a few sentences or concepts and then waits for the interpreter to translate them for the audience. The interpreter usually takes notes and then translates to the listeners. Booths and headphones are not necessary.

As the name suggests, in this interpreting technique the interpreter sits next to or behind the person(s) (ideally no more than two or three) who need(s) translation and actually “whispers” the translation into their ears as the speaker talks. It is a sort of simultaneous interpreting which, however, does not require the use of booths and headsets.

Liaison interpreting is mainly used for business-to-business negotiations or discussions between different delegations at trade shows, formal or informal meetings. In this technique, translation can be whispered to one of the parties or translated consecutively after the speech of either party, depending on how and where the event is taking place.

In the interest of good comprenhension by the audience – and hence of a successful event – it is advisable to provide the interpreter with as much information as possible about how the event will take place, the topics being discussed and speakers involved, so that the interpreter can be adequately prepared. Just like in written translation, knowledge of the topic is a key factor for ensuring service quality. This is why it is paramount to study carefully the subject matter before any assignment. I will be happy to answer any questions on the different interpreting techniques, choice of most appropriate technique for a scheduled event, quotes and provide any other information.

The main events in which I took part as an interpreter in the last few years include: